Located in central Cheshire, it is an area blessed with a large range of rivers, lakes and canal systems all within Winsford.

There were the first SUP boarding club in the UK to adopt their river through the Canal and River Trust adoption scheme, working closely with the CRT in protecting its environment, as a consequence, the club won an award.

It’s a way of us putting something back into our river Weaver that supports our activities.

Mid Cheshire SUP was set up by Brian Cadwallader. He set up the club initially to bring new experiences to people in the locality.  Through the use of social media they were able to promote the idea of starting a SUP club into the public domain.

It wasn’t long before like-minded people contacted them to have a go and MID CHESHIRE SUP club was born.

It’s been a lot of hard work, but so fulfilling. Brian says, “We can look back now over those twelve years, from starting off sharing my board, then getting another, to where we are today with a fleet of boards serving all our members needs.

We have a fantastic team driving Mid Cheshire SUP, the new management Nick Vincent, Lesley Graffham and Richard Cooke have all been instrumental in helping me shaping Mid Cheshire Club to be one of the largest SUP clubs in the North West of England.

We also have five ASI instructors supporting all our members and visitors, along with a social committee and SUP board maintenance team.

I’ve been paddling most of my adult life, mostly on rivers and lakes. The progression onto SUP eight years ago was a natural thing to do, but after holidaying in the south of France and experiencing SUP for the first time. It set me off on a new direction of bringing something new to water based activities in my area.

As a lecturer in Further Education I was able to offer SUP as an enrichment programme to many students attending college. It seems so long ago now, attending an ASI L1 course, gaining additional knowledge and skills, then to relay that information through the ASI SUP Wise programme as an ASI Instructor was certainly ground breaking in the Northwest.

However on leaving education I brought that experience with me to start a very proactive SUP club in the community “ MID CHESHIRE SUP" I had a full career as a fire officer with Cheshire Fire and Rescue Service, within my role I was a member of the UK international Search and Rescue teams, Swift water rescue team and the UK Urban Search and Rescue team. Deploying to natural disasters.

For many years I was an outdoor pursuits instructor with the Princes Trust, taking their students into the Lake District, to engage in many group based activities to bring them together as a team. Hard work but very satisfying watching them develop.

I was the vice chair of a large charity organisation in Cheshire “Deafness Support Network” supporting people with hearing loss and deafness across Cheshire and North Wales. A very responsible position which has enabled me to learn sign language, but also allowing Mid Cheshire SUP club to be more inclusive, bringing SUP to our deaf communities.

Mid Cheshire SUP is a local SUP club offering a wide range of activities to our members and visitors.

This includes beginners, intermediate and advanced paddle lessons, whilst also offering SUP Wise qualifications to all our members who go through SUP Rescue and Water safety training as part of their induction, which includes SUP board maintenance and inspection routines including practical first aid on the water.

SUP Yoga and SUP Polo are organised through the winter months and Tandem paddles.

We paddle all year on our natural waters and in winter we also use the swimming pool for various activities.

The club is continually growing in the adult market.  We have quite a collective group from all walks of life enjoying the one thing that has brought us together SUP.

The feedback we have received has been amazing and reflects our ethos.

To quote reviews from our MID CHESHIRE SUP Facebook page :- “ This is a really awesome bunch of people dedicated to helping people get into the sport, as well as supporting those already in it A***”

“ I went to the club last week for a taster session and loved it. The coach was so patient with me and gave the confidence I needed to get on and have a go. To any one of you who often see paddle boarders and think - I’d love to do that, this is the club for you. Everyone at the club was so friendly and put me at ease. I would definitely recommend it”

“ Since the taster session, I am now a member. The club is friendly, fun and also professional, the tuition excellent. I am looking forward to the open water”

We are ideally located at Winsford Flash Sailing Club based on the bottom Flashes on the River Weaver in Cheshire. From there we can paddle left onto the Lake known as the Flashes, then into the natural river, unspoilt by time or development, but turning right we can paddle onto the Weaver navigation.

The river was developed early last century to allow vessels from the River Mersey to navigate the river Weaver to service the growing salt trade. It has magnificent Victorian locks and weirs along the route.

The industries along the river have long since gone, with the river banks and surrounding area now given back to nature and a thriving country park.

Just down the road from our location we have two canals with access to us. The Trent and Mersey and the Shropshire Union canal. Again, set in lovely locations enabling us to paddle through the heart of Cheshire.

We are very fortunate in that we are situated in an area that within a ninety minute drive from the marina we have the River Dee, North Wales, Wirral and Southport coastline and Snowdonia lakes at our beckon and frequently visited by us.

We paddle at our National Heritage sites at the Royal Albert Docks in Liverpool and at the Anderton Boat Lift on the River Weaver. This really brings home the diverse cultures we experience and variety of paddles we offer to members whilst out SUP boarding.

We also have the use of our local swimming pool for activities such as SUP Yoga and SUP Polo to carry on through the winter months.

The club has facilities located right on the water with toilets, showers and equipment storage.

There is also free parking and grassy parklands where you can have a picnic or relax after your paddle.  Or have a refreshment in the local pub located right on the water. 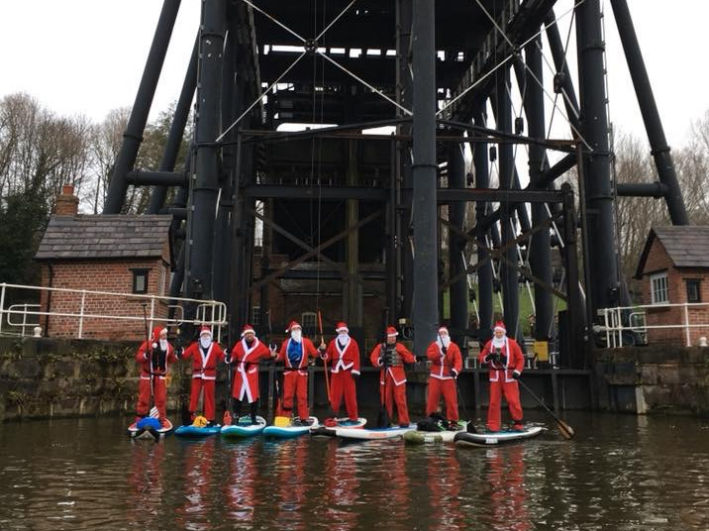 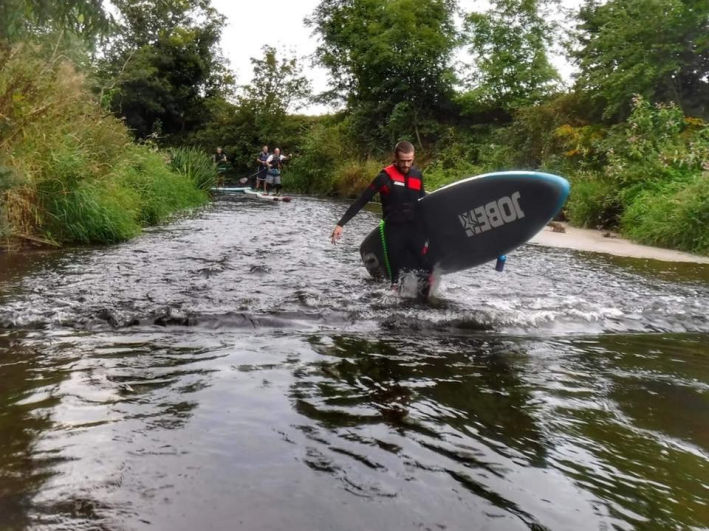 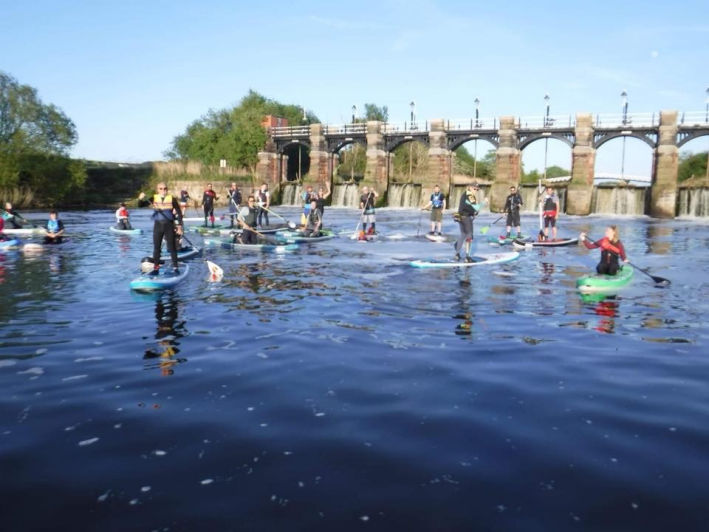 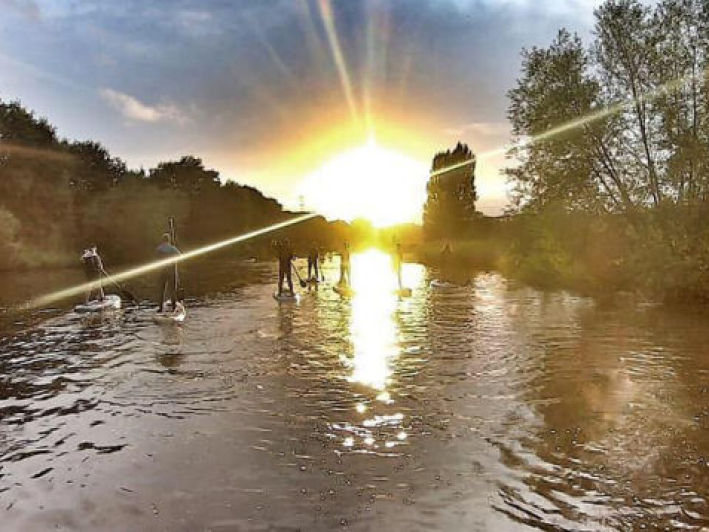 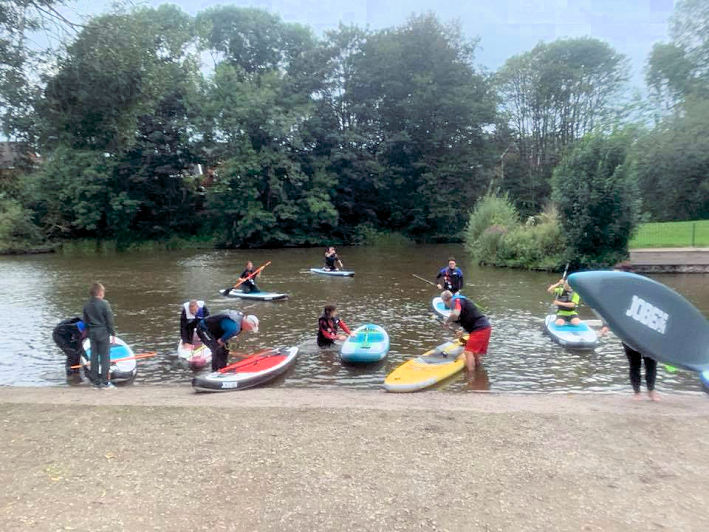 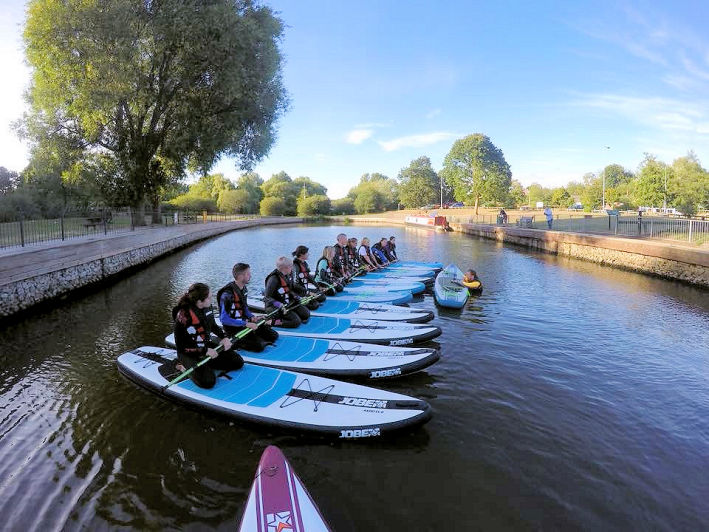