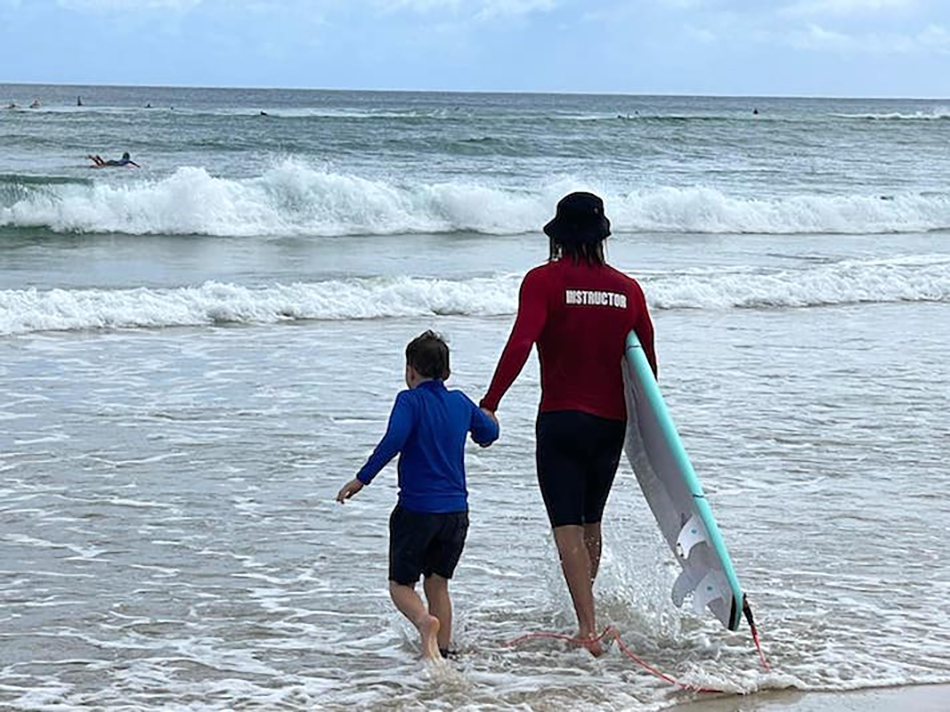 The role of the surf coach is a multi-faceted one where at times they will be far more than a simple giver of instructions.

A good surf coach goes beyond the normal parameters often associated with the role. They are a mentor, an inspiration, a font of never-ending knowledge, a motivator, and a friend.

Below, ASI dips into three important factors that make up the many parts of great surf coaching.

As a surf coach the ability to motivate is paramount. Picture this, a grey sky casts drizzle across the land. The wind is whipping in across sand and the waves are anything but ideal. The student is tired after a night on the tiles and their bleary-eyed lack of enthusiasm is the only thing clear about this morning. And now you face the ultimate coaching dilemma. How to keep your student excited and engaged when the other environmental factors are working against you?

The answer to this is of course about motivation. Personal motivation as a coach, and the ability to motivate your student. Without the first, the second is highly likely to fail.

As a surfing coach, it is vital that even when the day seems intent on making you fail, you have the intrinsic motivation to succeed. Intrinsic motivation is about acting upon the joy of the challenge itself as opposed to acting based upon external pressures or rewards.

An intrinsically motivated coach will be primarily focused upon the enjoyment and satisfaction garnered by teaching people to surf. For example, that buzz when a student first stands and rides on a board.

Let us accept you already have intrinsic motivation as a surf coach – I mean, it’s the greatest job in the world, right? – what tools can you use to instill a similar drive in your students?

Positive reinforcement is a vital one. Those calls of encouragement and celebration mean the world to a student, and the timing of such calls is important. To celebrate the failures is potentially as vital as cheering the successes. Encouragement in the face of a wipeout on take-off is as strong a motivating factor for students as the praise following that first ride. If we consider that the wipeouts will be far more plentiful in the beginning stages of any aspiring surfer’s journey, the key to positivity from the coach becomes clear.

Such positivity must be combined with instruction that lacks criticism. Rather than pointing out what the surfer did wrong, perhaps offer advice such as, ‘that was a good, but this time how about trying this and seeing if it makes a difference?’

The true key to motivation as a coach is to be motivated yourself. In this way you understand the thrill of the moment you are trying to share, the stoke that surfing delivers, and the joy a great session can bring long after you leave the waves.

Every student who comes to you for a lesson will be different. Each will develop at different rates. The above-mentioned motivation factor will be evident in some and will require a little digging to uncover in others. The diversity in the students you see mean that your own ability to adapt on the fly within a session is a great skill to have.

We can all pre-plan a session to the finest detail, but at times a planned session will unravel due to various factors coming into play. Maybe the conditions suddenly change, or perhaps the student nails the planned skill work super-fast and the session still has an hour to run.

This is where the adaptability of the coach comes to the forefront. A good surf coach can adapt the session on the fly to ensure the student still gets the most from their time in the surf. Such a skill does undoubtedly improve with time and experience. Much like a classroom teacher being able to allow a lesson to take its own course upon the back of an unexpected student debate, the surf coach who can do similar with a lesson plan is working from great coaching foundations.

It might be considered that the first step to achieving this is to accept that every student is different. Each has their own goals, motivations and ability levels right from the off and the lesson plan is not a one-size fits all solution. As such, an adaptable plan can be drawn that rather than offering the coach an on-rails route through the lesson, instead makes allowances for differentiation.

This sort of plan is particularly helpful for group sessions where members move at different speeds as it allows for every student to remain challenged and engaged throughout the session. This ongoing engagement plays back into the motivation – continued engagement = continued motivation.

Although adaptability will become like second nature with rising experience as a coach, it is a great idea to embrace this as a key element even in the first steps on your surf coaching journey. Play around with session plans, challenge yourself to change a session on the fly if you believe a student is finding the current task stale or too easy, and explore ways and ideas in which you can craft something that is totally personal to you as a coach.

Communication is a vital tool for every surf coach. This is not simply about making yourself heard above the crashing waves, but is about how to communicate in a way that is reinforcing and instructional for the student.

A good communicator can pick up on areas for improvement or moments that didn’t quite work for the student in a way that doesn’t demoralise the aspiring surfer. It is possible to critique something without criticising it.

If we consider that what the coach requires to get the best out of their session is for a student to be motivated and confident, then the role of positive communication is clear.

We also begin to see how each of the three aspects talked about here are interlinked to some extent – poor communication can damage motivation – a lack of motivation can derail the session – lack of adaptability can stop the session from regaining focus.

Coaching communication will differ depending upon the level of the surfer. The elite competition surfer, for example, may expect or even thrive from some blunt coaching feedback, using it as motivation, but this is something that the coach will learn over time spent with the individual and will tie back into adaptability. However, for those students in the earlier stages of the sport, positive communication is vital!

Offering suggestions on the pop-up or the paddle stroke is easier for the student to hear than criticising where they are currently going wrong. Asking them to try an alternative approach for example whilst still acknowledging what they just did was good does wonders for confidence.

The good communicator is tasked with ensuring their words are always delivered with the intention of elevating their student as a confident surfer. Even when they are offering critique. It is important that in the first stages of teaching a new student, the surf coach takes real note of how their feedback affects a student. They should seek to understand which approach gets the best from their client and adapt as required.

Basically, big up your students for every effort they make whilst offering valuable advice and instruction on the next step in making their surfing dreams a reality. A good surfing coach will look to find the perfect balance between being the educator and the cheerleader.